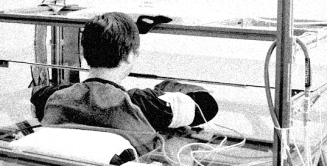 We are pursuing the idea that certain features of movement are implicitly guided by motivation and reward–principles of reinforcement learning similar to those that guide explicit behavioral choices like what to eat for dinner. The speeds of our daily movements, like walking, feel normal because there is a built-in sense of satisfaction from walking at that speed. In this framework, Parkinson’s disease (PD) slows movements down by changing the set temperature that “feels” satisfactory as normal. We are studying what makes normal speed “normal” and how this sense of normal can be changed.

Ning Qian at Columbia University has developed a novel model of the control of goal-directed movements like reaching and pointing. The model uses an infinite-horizon version of optimal feedback control to avoid a major limitation of traditional optimal feedback control, namely, the need to specify movement duration. I have contributed knowledge about trajectories of human reaching movements to this project.

Status: Past and Planned. Role: Primary

The problem: how can we detect the onset of motor manifestations of Huntington’s disease (HD) as early as possible? One answer: identify the motor control principles that HD disrupts, and then design motor tasks that specifically test those principles. We have studied how HD affects the control of reaching movements and motor learning. A future goal is to design motor tasks that employ these findings to monitor presymptomatic people with the HD mutation, so as to accurately and reliably detect the onset of motor symptoms. This knowledge can then be used to plan and interpret studies of therapies to slow down or stop disease progression.

An idea from our studies of motor control principles is that basal ganglia circuits set a sense of what ways of moving feel normal, and that PD changes the set points for how we should move in order to feel (outside our awareness) that we are moving normally (see project “Control of Movement Speed”, above). Because the quantities involved have analogy to those or reinforcement learning, this idea can be loosely phrased as: Moving in particular ways is deemed satisfying by our motor system, similarly to how we feel satisfaction when we save money on an item that is on sale. PD changes how we move by changing what our motor system considers satisfying. This principle suggests that, if we want to change how someone with PD moves, we need an intervention that changes how our motor system feels about a way of moving. Dance lets us learn a novel movement that is initially difficult and awkward, and feels far from normal. After the dance has been learned, the same movement feels easier and more natural. By taking advantage of modern dance’s tradition of creating a dance out of just about any movement, we joined forces with a choreographer at the Mark Morris Dance Group to design a dance to change how people with PD walk. We refer to this approach as Motor Control-guided Dance creation, or MoCoDa. The project’s overall goal is to craft dances that allow people with PD to acquire ways of moving that we consider normal, but that feel novel to them, so that they can dance their way through daily life.

Freezing of gait: Detection and Intervention 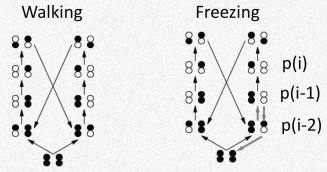 I (and others) believe that the next generation of treatments for freezing of gait (sudden gait interruptions that cause falls in people with PD) needs to be event based and closed loop. nature, analogous to implanted cardiac defibrillators. I have been collaborating with two engineering groups on real-time detection of freezing of gait. One approach employs foot pressure detection (Sunil Agrawal, Columbia University). The other approach employs kinematic gait analysis (Arye Nehorai and Gammon Earhart, Washington University in St. Louis). Automatic reali-time detection of freezing episodes will allow development of event-specific interventions to abort or prevent freezing of gait. 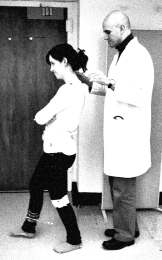 The onset of motor symptoms in HD is an important but rare event. It occurs once in a lifetime, and the best prediction accuracy has a standard deviation of 10 years. In a heroic 12-year longitudinal study of more than a thousand presymptomatic HD gene carriers, only about 25% symptom onset events occurred. The CHDI foundation responded to this problem by funding the comprehensive prospective monitoring of large numbers of presymptomatic carriers (through the ENROLL-HD study), but this effort needs to enlist technology to further multiply the number of participants who can be monitored. To this end, I have been devising algorithms for video-based movement analysis using machine learning. The goal is to enable world-wide web-based participation in motor tasks specifically designed to detect the onset of HD (see project “HD Symptom Onset: Principles”, above), along with automated movement analysis to flag abnormalities for review by human experts.